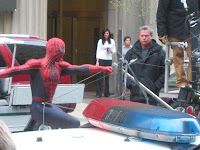 Hi, hello, and welcome to Midwest Movie Maker, your premiere source for informative and entertaining news and views about filmmaking and filmmakers in and from the Midwest.

As you can see, we’re still hanging lights and moving props. You might even call this Midwest Movie Maker: Take Two. (It’s a long story – so let’s just say this: We won.)

So what’s our deal? And why is there a picture of Spider-Man in our profile? (The same one that adorns this blog post?) Originally, it was because our first stab at MMM launched on the same day Spider-Man 3 premiered in theaters in 2007.

And that’s not a promo pic, by the way. That’s a snapshot I took on my way to work in April 2006. That’s when a second unit crew from Spider-Man 3 spent the better part of a week and a half in Cleveland, shooting one of the summer blockbuster’s larger action set pieces.

The crew took up nearly 10 city blocks along Euclid Avenue. They sped, crashed, flipped and demolished all manner of vehicles, much to the delight of lunchtime onlookers. Spider-Man was spotted slinging webs in the theater district and battling the Sandman in the intersection of E. 9th and Euclid.

By the time the shoot was over, Cleveland had adopted old webhead as one of its own (a Westsider, no doubt), and local news stations were declaring the city Hollywood on the Northcoast.

And at the time, it seemed like this might be a reality. Prior to Spider-Man swinging into town, a crew had wrapped on the comedy The Oh in Ohio with Paul Rudd, Parker Posey and Danny DeVito.

It seemed like the work of the Cleveland Film Commission was slowly, but surely, coming to fruition. The small office and its dedicated crew worked hard to convince officials that attracting film crews and productions to the city would be both a mechanism for revenue generation and recognition that is largely – if not completely – overlooked by comparable cities throughout the United States and the Midwest.

They’re still working hard, by the way, to both pass a tax incentive for the state of Ohio that will help draw filmmakers to the region (one that recently was OK’d by the state’s house and senate, but vetoed by Governor Ted Strickland – but more on that in a later news post) and convince filmmakers that locating in Cleveland is not only a viable option, but a desirable one.

It offers everything a production would need: talent and crew, world class accommodations and attractions, a shoreline that can mimic any ocean or sea, a downtown that can mimic Manhattan or L.A., Middle America suburbs, countryside – the list goes on and on.

With technology advancing every day, shooting on location is less and less an obstacle. Before long, locating in Hollywood will no longer be a necessary evil to producing commercial feature films and television programs. For proof, look to Austin’s vibrant film community.

There’s no reason the Midwest can’t become the New Hollywood. The variety of locales, the low cost of living, the burgeoning incentive programs, its accessibility to the rest of the nation – it’s a virtual treasure trove for today’s filmmakers.

All that’s needed is a map to guide them.

And that’s what we aim to be.

Take a look around. Get a sense of what’s coming soon. Or just drop us a note and say hello.

More importantly, if you’re a filmmaker tell us about your film. We’re interested in telling the stories of films of all sizes. So let us know.

In the meantime, we’ll get back to work.