Constructing ‘The Avengers’ Sets on E. 9th in Cleveland; Could This be the Entrance to Stark Tower? 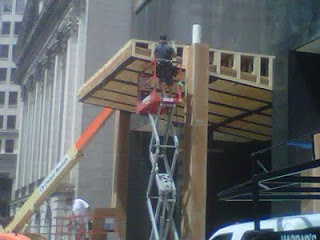 Wednesday, I had the good fortune to attend a Cleveland Indians game with my 7-year-old and his summer camp. While walking back from Progressive Field, I caught what looks to be set construction for the upcoming Avengers film.


Actually, I’m 99 percent sure it is. Recent info from the Plain Dealer ‘Avengers’ Blog warns commuters that several roads will be closed during August, including E. 9th (the main artery in and out of town, for those of you not familiar with ). And you can’t mistake a film set when you see a couple Haddad’s trucks parked nearby. 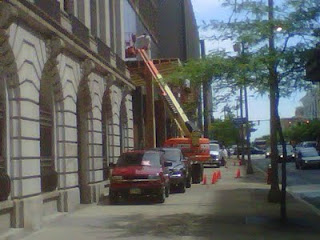 So the question is, what is this place they’re constructing? They’re building onto the , what locals sometimes call the . That particular building has been abandoned for nearly 20 years. It stands next to a beautiful old bank, also deserted, which featured briefly in Spider-Man 3, when that film shot along . 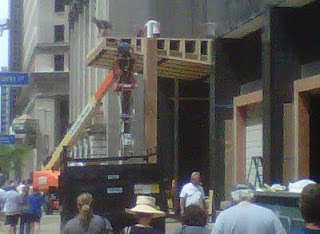 Gut instinct says it’s standing in as a more modern building, with a cascading entrance more appealing to the eye. But I hope it turns out to be a real set piece. Maybe the offices of SHIELD (when not occupying the Helicarrier, of course).

Or maybe – just maybe – it’s the entrance to .
.
(for those of you not as geeky as some of us) is the 93 story headquarters of Tony Stark, aka Iron Man, played by Robert Downey Jr. In the comics, the top three floors of the office building are reserved for The Avengers to congregate and, if need be, live. 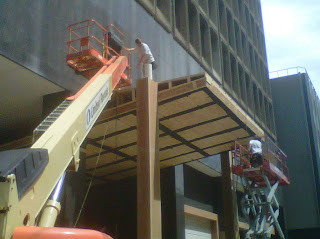 Time will tell, I suppose. Or at least a few more days of construction. By then, we should see an address or some brand logos.

Becky said…
I drove past it today and it's still being constructed, which would lead me to believe that it isn't just a random background facade. I also spoke with someone who works downtown that mentioned they've been working on it pretty regularly for the past few days. It's much farther along than it was when you saw it, too. The entrance is completely covered over in the same sleek black material as the rest of it. I'm also thinking either Stark Tower or SHIELD. Maybe I'll find out when I stalk production next week.
August 3, 2011 at 6:04 PM

Tom Tennant said…
Thanks, Girl! Let us know, too, what you find out. We'll work our contacts and see if we can talk to some folks working on the production as well.
August 7, 2011 at 11:51 PM