Keeping Up With 'The Avengers'; Lots of Little Tidbits and More Pics 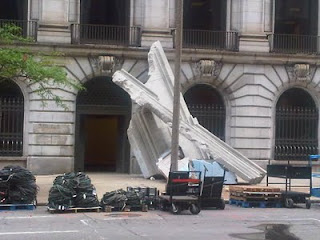 More information is trickling in about the soon-to-shoot Avengers film. One great resource is Cleveland.com's official Avengers page. Part of The Plain Dealer, Cleveland's daily newspaper, the site is connected to the production in a way that only daily metropolitan newspapers can be.

It's here we first learned that the E. 9th Street set is a replica of New York City's 42nd Street. I've been scrolling through Google Earth to see if it's an exact replica, but I can't find restaurants like "Grand Central Bistro". (Let us know if you can find the real place, if it exists.) 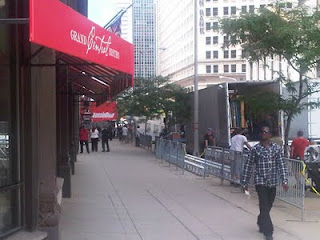 We also learn more about The Avengers' production in Sandusky at NASA's Plum Brook facility. Plum Brook is home to the world's largest space environment simulation chamber. It's designed and constructed to test both nuclear and non-nuclear space hardware in a simulated low-Earth-orbiting environment. Word is only one Avengers cast member is shooting at NASA: Samuel L. Jackson, aka Nick Fury. This feels a little Helicarrier to us, but we're just making guesses at this point. Of course, it could really look good on film, too. 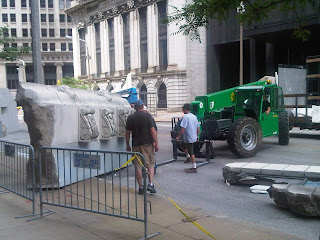 The site also provides a running tweet log for fan sitings of stars and production crew. Our favorite so far is this picture from "wickedqueenz71".  It clearly shows either Chris Evans or his stunt double rehearsing the upcoming battle scene. (We're calling it a rehearsal because there are no cameras around, the actor is clearly out of costume, and we suspect this is to block action once the E. 9th Street set is complete.) Best part? You can make out Captain America's shield. 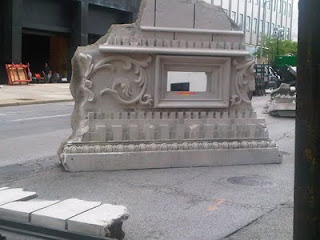 Oh, and this shot of a very relaxed Sam Jackson making his way through the streets of Cleveland: http://yfrog.com/hsp7dqhj.

And our friend KD comes through with some more shots of the E. 9th Street set. No confirmation if we'll see Stark Tower. After all, the only Marvel superhero building located on 42nd Street that we know of is the Baxter Building, home of the Fantastic Four. 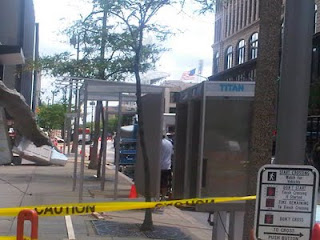