'Draft Day' captures the hope and despair of the Cleveland Browns

on March 27, 2014
Review by Scott Dodson
Being a Cleveland sports fan is unlike any other fan in the country.  We've seen the Fumble.  We've seen The Shot.  We've watched our closer blow a lead in the seventh game of the World Series.  We've seen some very good teams, and we've seen some very bad teams.  Boston fans would claim strict allegiance to Red Sox nation while hoisting the Lombardi Trophy high above their heads.  Those "lovable losers" of Chicago weren't complaining when Michael Jordan filled his hand with rings.


Cleveland sports fans have now watched over 140 consecutive seasons without winning a championship.
Yet, hope springs eternal here.  We hold out hope that, this year, our pitching holds up while ignoring a glaring lack of power hitting.  We pray that we catch lightning in a bottle as we sign injury prone point guards.  And draft day has become the town's de facto Super Bowl.
It's no surprise that the Cleveland Browns' franchise was chosen as the team to focus on in the upcoming film Draft Day, but it is surprising that the film manages to grasp and explain what it feels like to be a Cleveland sports fans. It's an interesting tale with some real world inspiration, it's funny, and it will leave you wishing that we were preparing for the upcoming season.  The cinematography was used effectively to make telephone conversations interesting, and (overall) made for a great watch.
Sonny Weaver Jr (Kevin Costner) is the embattled GM of the Cleveland Browns as the film opens.  It's draft day, and the day could not have come at a worse time in his life.  His late father was the beloved coach of the Browns the previous season, and Sonny fired him.  His (secret) girlfriend Ali (Jennifer Garner) told him that she is pregnant with their child, and everybody is still reeling from Coach Weaver's death (one week earlier). 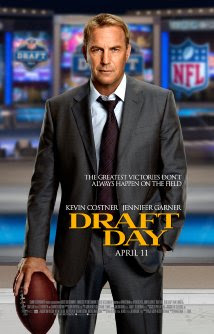 The Browns have the number 7 pick in today's draft, and are taking a hard look at linebacker Vontae Mack (Chadwick Boseman) (who they know they can get) and running back Ray Jennings (Arian Foster) (who is falling in the draft due to an incident).  In the midst of this, the Seattle Seahawks (who have the first pick) contact Sonny regarding a possible trade.  The marquee player of the draft is Heisman trophy winning quarterback Bo Callahan (Josh Pence). Sonny knows he has to make a splash in the draft or risk being run out of town, so this trade is quite appealing.
Sonny ultimately makes the deal, and the Seattle franchise is celebrating its fleecing of the Browns.  The Browns owner (Frank Langella) loves the deal as it gives him the notoriety he craves, but the Browns new coach (Denis Leary) hates the deal.  The Browns sell the farm to make the deal (which, according to the Seattle GM, is ok as "the farm sucks anyways"), and the rest of the day is dealing with the repercussions of the move.  Sonny's "weak kneed" quarterback (Tom Welling) demands a trade as he believes Sonny has lost faith in him.  Coach Penn (Leary) passive aggressively confronts Sonny throughout the day.  Ali is becoming annoyed at her role in Sonny's life, and his mother (still grieving) shows up demanding his time as well.
As the draft start quickly descends upon the group, they begin the vetting process of Bo Callahan.  Mysterious questions arise, and Sonny is left wondering whether he "sold the farm" for a bust.
Draft Day surprisingly captures the hope and despair of the Cleveland Browns.  We tend to be quite self deprecating about our team, and so is the film.  By using ESPN 850 Hosts Tony Rizzo and Aaron Goldhammer throughout, the film captures the voice of a fan relating this instead of just taking cheap shots from an outsider.  Initially, the film does walk you to the ledge.  However, it backs us off slowly while building our hope.  (And, slight spoiler, the film ends at a proper place:  Before anybody plays one down this fall.).  The hope is left intact.
The film had some interesting cinematography as well.  As most of the action of the film is last minute telephone calls between business men across the country, we were't subjected to cut backs repeated.  It goes split screen, and the screens will cross over or into each other.  It reminded me of Zombieland when the rules of survival were plastered to the background during certain scenes.
The acting is pretty good, and Rick (the intern) steals the show here in comic relief.  Sonny and Ali seem like an unlikely couple on paper, but the characters work well here.  Ali seemed quite soft spoken for her role in the organization, but, other than that, the characters fit their parts perfectly.  While Foster looked was good as the nervous prospect, Sean Combs was not good as Bo's agent.
If you are a Browns fan, you'll love Draft Day.  If you love the NFL, you'll like the film.  If you don't like either, the popcorn's good, there's a trailer for Step Up:  All In attached to the film, and Rick (the intern) is funny.  It's worth a watch, and it makes you proud (but sad) to be a fan of the Cleveland Browns.
Scott Dodson proudly writes for www.scaretissue.com and moderates the popular forum at www.killthecan.org.  Scaretissue.com is a horror movie review site that will be sponsoring the Eerie Horror Film Festival this October. He's an avid Cleveland sports fan, married father of two, and huge movie fan. You can follow him on twitter at @_trapjaw_.
cleveland browns draft draft day draft day review football movies ivan reitman kevin costner movies made in cleveland sports movies