It’s pretty safe to say - and with absolutely no disrespect - that at any other time in modern movie making history, Travis Irvine’s Killer Raccoons! 2! Dark Christmas in the Dark would barely make a dent in the box office.

But it’s not any other time in modern movie making history, and for a short period in late July, the parody was the No. 1 comedy in the U.S. It was also the only comedy in theaters that particular week, Irvine told Cleveland.com.

Not too shabby for a $50,000 sequel to a $5,000 feature shot in and around Athens, Ohio, about 15 years ago while Irvine was an Ohio University student. Irvine, writer, producer and director on Killer Racoons! is also quick to spread the creativity and innovation around.

“We had an incredible crew of pros and semi-pros based in Ohio,” Irvine says, “as well as some Ohio-expats living in Los Angeles and New York City, along with 12 to 15 amazing interns from Ohio University. Without all their tenacity and hard work, the movie would've never gotten done!”

Today, Irvine, alongside friends and colleagues who helped develop, produce and distribute the team’s first feature, manage Overbites Pictures, a Columbus-based production house that specializes in corporate and political videos with a humorous bent. Their work has been featured on The Jay Leno Show, PBS NewsHour, FunnyOrDie and at the 2010 Cannes Film Festival.

We chatted recently with Irvine about all things film and raccoon.

Midwest Movie Maker (MMM): Where’d you grow up? And when did you know you wanted to be a filmmaker?

Travis Irvine: I was born and raised in Columbus, Ohio, and I'd say the film bug bit pretty early on when our family acquired a big clunky VHS camera. My older half-brother would use it to make home movies with Legos and such in the summers, so naturally, I followed suit. My first movies were made mostly with my sister and friends, Legos, puppets and costumes. These eventually morphed into even better (and funnier!) videos in high school.

MMM: How’d you go from movies in the backyard to Killer Raccoons!?

TI: I made the first killer raccoon movie while I was a student at Ohio University, which is also where I learned all the skills I needed to pursue a multi-faceted career in filmmaking, comedy, journalism and politics. All of my work these days comes from one of those career paths.

Filmmaking, though, is different. It's very intense for a few years before any payoff comes. For example, we shot Coons! Night of the Bandits of the Night for $5,000 in 2005 and Troma (the production company that picked up the film for distribution) didn't release it until 2008.

My mayoral documentary American Mayor was shot in 2007, but didn't get finished until 2010.

MM: Tell me a bit about the first film and how you got it made at OU.

TI: To paraphrase what Stanley Kubrick said about his first movie, the most important thing is that Coons! "got done at all."

I had the idea while my comedy troupe buddies and I were on a camping trip in Florida for spring break in 2004. We had watched the remake of Dawn of the Dead (my first ever zombie movie!), and later that night raccoons attacked the campsite's food, so that's what really inspired the whole idea.

I got started on the script, and we shot it all in the summer of 2005 between my junior and senior years. Family, friends and a few professors all helped out, not to mention a pest control expert who was able to provide us with seven dead frozen raccoons as our stars. 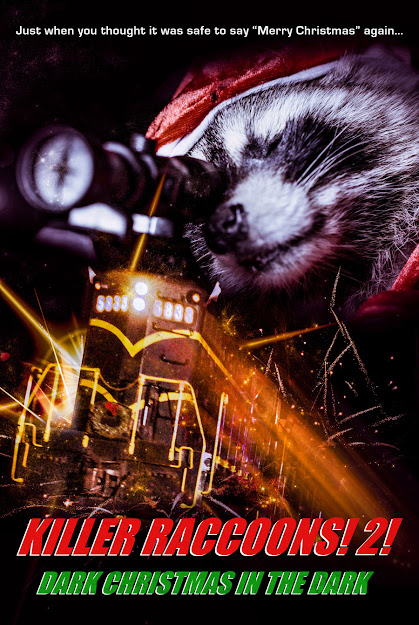 MM: What's Killer Raccoons! about, and how did the idea come to you?

TI: Since 2006, my cohorts and I always knew any sequel to Coons! would have to have:

1) A better name and

2) Be a scene-for-scene parody of Under Siege 2: Dark Territory.

After forgetting about it for a few years, I began plotting the outline in 2013 and worked on the script from 2014 to 2015, which mainly involved me watching Under Siege 2 and rewriting the scenes with raccoons.

Basically the plot is our hero from Coons! gets out of jail after 10 years, only to get on a train to Washington, D.C., that gets hijacked by the raccoons and bad guys from the first movie.

MM: How did you get Killer Raccoons! off the page and on to the screen?

TI: The main thing we had to do was take the Under Siege 2 elements and combine them with Die Hard 2: Die Harder elements to make the movie as affordable, unique and Christmasy as possible.

The main things to get together were:

1) Dead, frozen raccoons, similar to the first the movie,

2) A train for cheap, which we secured from the nice folks at the Hocking Valley Scenic Railway in Nelsonville, Ohio, and,

We knew this would have to be a larger budget than the first movie, so we aimed for a $50,000 budget, which we raised in chunks from friends and family over 2017 and 2018.

MM: Tell me about the cast

We tried to get a few pros, a few newbies, and some comedians who hadn't acted before, but at least had a sketch comedy background.

For our L.A. cast, we tried to nab as many "names" as possible, and we laned guys like Ron Jeremy, Ron Lynch, James Adomian and other folks.

MM: Why was filming in Ohio important to you - and why others should consider shooting outside the coasts and Atlanta?

TI: It was very important to shoot (and do our post production) in Ohio because we feel the Ohio film industry is up to Hollywood's standards. It just needs more national attention and development. If big and smaller indie movies can be shot in Pennsylvania and Michigan, then we can certainly shoot big and smaller indie movies in Ohio.
#FilmedInColumbus #FilmedInOhio coronavirus covid-19 Killer Raccoons 2 Ohio University film raccoon comedy Travis Irvine